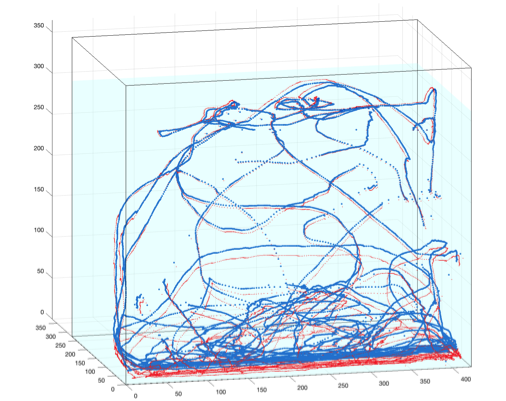 Detailed quantifications of how predators and their grouping prey interact in three dimensions (3D) remain rare. Here we record the structure and dynamics of fish shoals (Pseudomugil signifer) in 3D both with and without live predators (Philypnodon grandiceps) under controlled laboratory conditions. Shoals adopted two distinct types of shoal structure: “sphere-like” geometries at depth and flat “carpet-like” structures at the water’s surface, with shoals becoming more compact in both horizontal and vertical planes in the presence of a predator. The predators actively stalked and attacked the prey, with attacks being initiated when the shoals were not in their usual configurations. These attacks caused the shoals to break apart, but shoal reformation was rapid and involved individuals adjusting their positions in both horizontal and vertical dimensions. Our analyses revealed that targeted prey were more isolated from other conspecifics, and were closer in terms of distance and direction to the predator compared to non-targeted prey. Moreover, which prey were targeted could largely be identified based on individuals’ positions from a single plane. This highlights that previously proposed 2D theoretical models and their assumptions appear valid when considering how predators target groups in 3D. Our work provides experimental, and not just anecdotal, support for classic theoretical predictions and also lends new insights into predatory–prey interactions in three-dimensional environments. 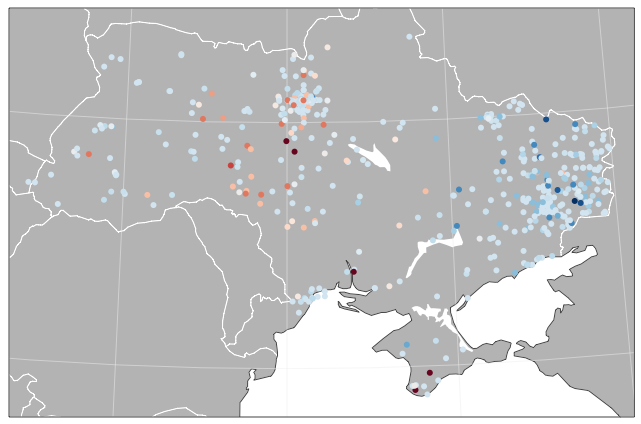 Multiple countries have recently experienced extreme political polarization, which, in some cases, led to escalation of hate crime, violence and political instability. Besides the much discussed presidential elections in the USA and France, Britain's Brexit vote and Turkish constitutional referendum showed signs of extreme polarization. Among the countries affected, Ukraine faced some of the gravest consequences. In an attempt to understand the mechanisms of these phenomena, we here combine social media analysis with agent-based modelling of opinion dynamics, targeting Ukraine's crisis of 2014. We use Twitter data to quantify changes in the opinion divide and parametrize an extended bounded confidence XY model, which provides a spatio-temporal description of the polarization dynamics. We demonstrate that the level of emotional intensity is a major driving force for polarization that can lead to a spontaneous onset of collective behaviour at a certain degree of homophily and conformity. We find that the critical level of emotional intensity corresponds to a polarization transition, marked by a sudden increase in the degree of involvement and in the opinion bimodality. 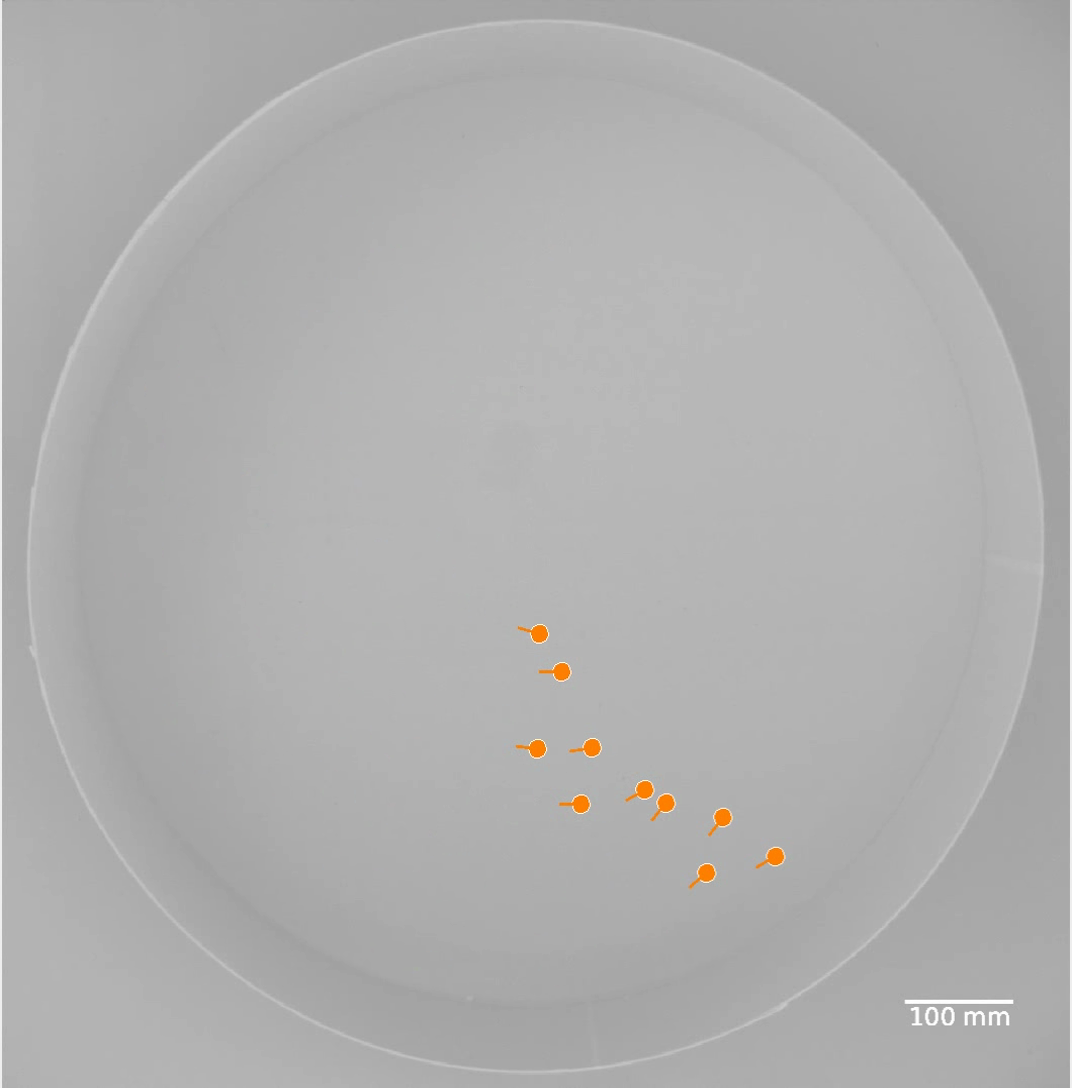 While a rich variety of self-propelled particle models propose to explain the collective motion of fish and other animals, rigorous statistical comparison between models and data remains a challenge. Plausible models should be flexible enough to capture changes in the collective behaviour of animal groups at their different developmental stages and group sizes. Here, we analyse the statistical properties of schooling fish (Pseudomugil signifer) through a combination of experiments and simulations. We make novel use of a Boltzmann inversion method, usually applied in molecular dynamics, to identify the effective potential of the mean force of fish interactions. Specifically, we show that larger fish have a larger repulsion zone, but stronger attraction, resulting in greater alignment in their collective motion. We model the collective dynamics of schools using a self-propelled particle model, modified to include varying particle speed and a local repulsion rule. We demonstrate that the statistical properties of the fish schools are reproduced by our model, thereby capturing a number of features of the behaviour and development of schooling fish.

Read more about this work: Phys.org 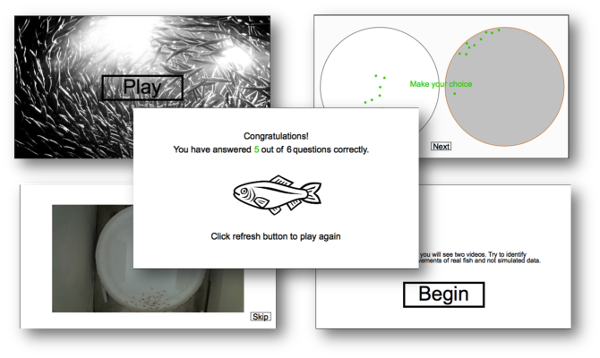 A Turing test for collective motion

with James Herbert-Read and David Sumpter

Animal collective motion is often studied through a combination of computational modelling and experiments. But is it really enough to compare the large-scale statistical properties of the model and experimental data to conclude that the proposed model adequately describes the observed phenomenon? In our work published in Biology Letters we addressed this question drawing inspiration from works of Alan Turing on artificial intelligence. We first built a self-propelled particle model informed by experimental data. Then, we asked members of the public to complete an online test (a modified Turing test) in which they were asked to differentiate between the collective movements of real fish schools and those simulated by the model. Even though the statistical properties of the real data and the model were consistent with each other, the public could still tell the difference between the two. Our results highlight the importance of model cross-validation for achieving biologically realistic behaviour. On the other hand, these results demonstrate that we can use 'citizen science' to improve model fitting not only in the field of collective behaviour, but also across a broader range of systems and scales. 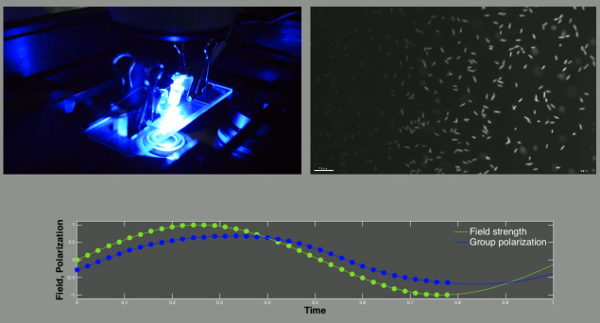 Hysteretic dynamics of active particles in a periodic orienting field

with Dimitri Scholz and Vladimir Lobaskin

Active motion of living organisms and artificial self-propelling particles has been an area of intense research at the interface of biology, chemistry and physics. One of the observations that boosted the development of theory of collective motion is that the active species may behave much like magnetic spins: they achieve coherent motion by aligning their direction to the nearest neighbours. It remained unknown, however, whether a swarm can be also controlled by external field in a way similar to permanent magnets (such as compass needle). In our paper published in the Journal of the Royal Society Interface we studied the dynamics of active swarms in alternating fields. We measured hysteresis of the velocity of an active swarm in computer simulations and experiments on unicellular algae Euglena gracilis. The phototactic Euglena cells were driven by variable illumination and tracked using microscopy. We found not only a full analogy of the observed active motion to magnetic hysteresis but also managed to quantify the controllability of the swarm and identify the signatures of collective behavior of the active agents. In particular, the collective response was only possible when the field was varying slowly and the active species had enough time to align their motion. The group’s motion was then more persistent than that of an individual. By contrast, at high field frequencies, the active group fails to develop the alignment and tends to behave like a set of independent individuals even in the presence of interactions. The observed laws might describe a variety of dynamic phenomena from the motion of synthetic active particles to animal flocks and herds, human crowd or opinion dynamics and help to formulate the general laws of collective behaviour. 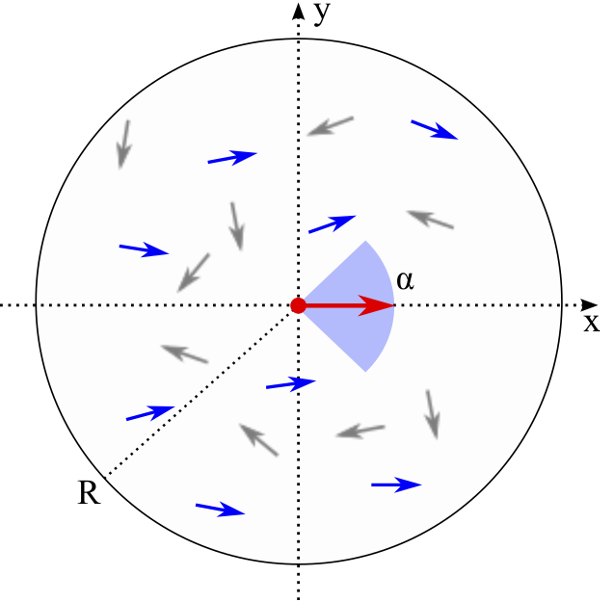 with Vladimir Lobaskin and Thomas Ihle

Mechanisms of collective behavior in groups of animals represent one of the most intriguing problems at the interface of physics and biology. The level of consciousness of the individuals apparently plays minor role for the large scale dynamics as the same general principles that apply to groups of animals or cells seem to govern also human social phenomena, traffic, and decision making. In our paper published in Physical Review E we study possible scenarios of self-organized collective behavior in a Vicsek model with bounded confidence. In our model, the active agents ignore their neighbors whose orientations deviate more than a fixed restriction angle from their own. The restriction angle thus quantifies the open-mindedness of the individuals. Like the standard Vicsek model, our model shows a transition into globally aligned state at low noise. We demonstrate in the limit of small restriction angles the critical noise amplitude decreases with that angle according to a power law with exponent 3/2. For small system sizes the kind of the phase transition to aligned state changes from continuous to discontinuous at a tricritical point. Moreover, at very small interaction angles the polar ordered state becomes unstable with respect to the apolar state. The dynamic steady states predicted in our model can be interpreted in terms of opinion dynamics: the globally aligned phase can be associated with consensus, while the nonpolar aligned phase with opinion polarization. 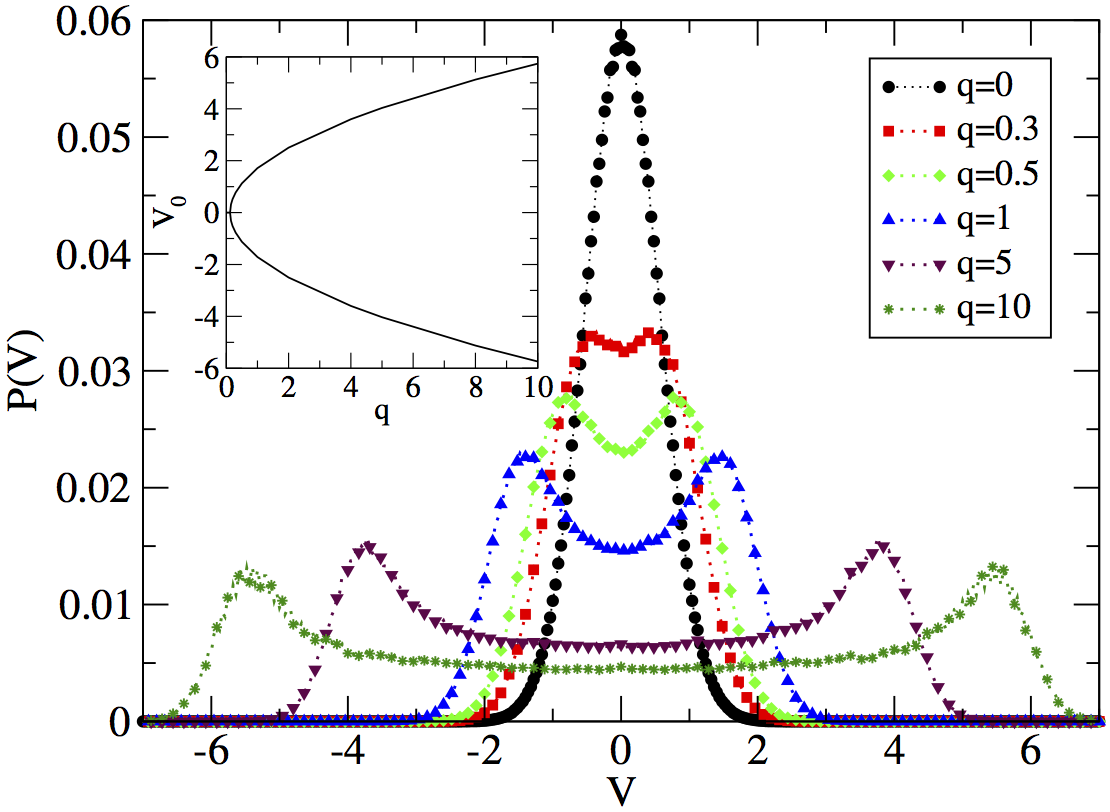 Active matter forms a separate class of biological and physical systems that are essentially out of equilibrium. Such systems are extremely complex as they are composed of large numbers of active agents, each of which gains kinetic energy from the environment. In this work published in Physical Review E we study systems of Active Brownian Particles, where the individual agents in addition to "consuming" energy from the environment are subjected to pairwise interparticle forces introduced through Dissipative Particle Dynamics-like approach. We show that despite the alignment mechanism and the character of individual motion in our model differ from those in the well-studied Vicsek model (the main work-horse of the field of collective behaviour), it demonstrates identical statistical properties and phase behavior. 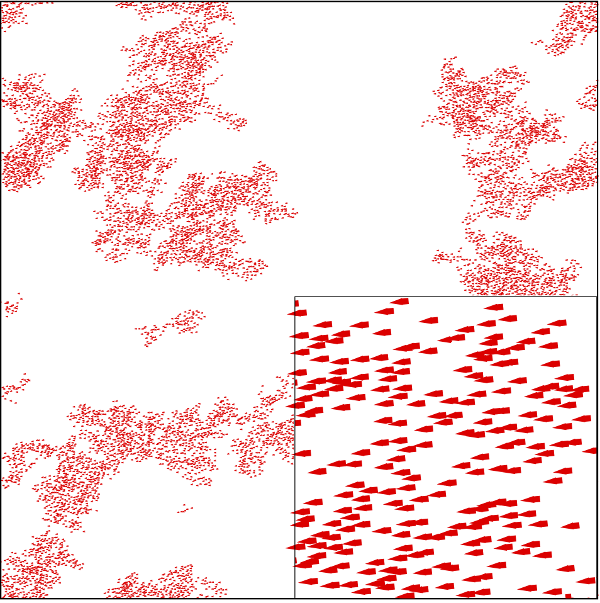 Swarming is the spontaneous organised motion of a large number of individuals. In this work published in European Physical Journal B we study dense systems composed of self-driven particles - autonomous agents that move at a constant speed and follow only two simple rules to update their direction of motion. The particles avoid collisions with their nearest neighbours and align with the neighbours located at slightly larger distances. We show that in addition to the transition to an ordered state on increasing the particle density, there exists a transition into a disordered phase at the higher densities, which can be attributed to the destructive action of collision avoidance. These findings shed some light on the physical mechanisms of the destruction of orientational order in overcrowded systems.